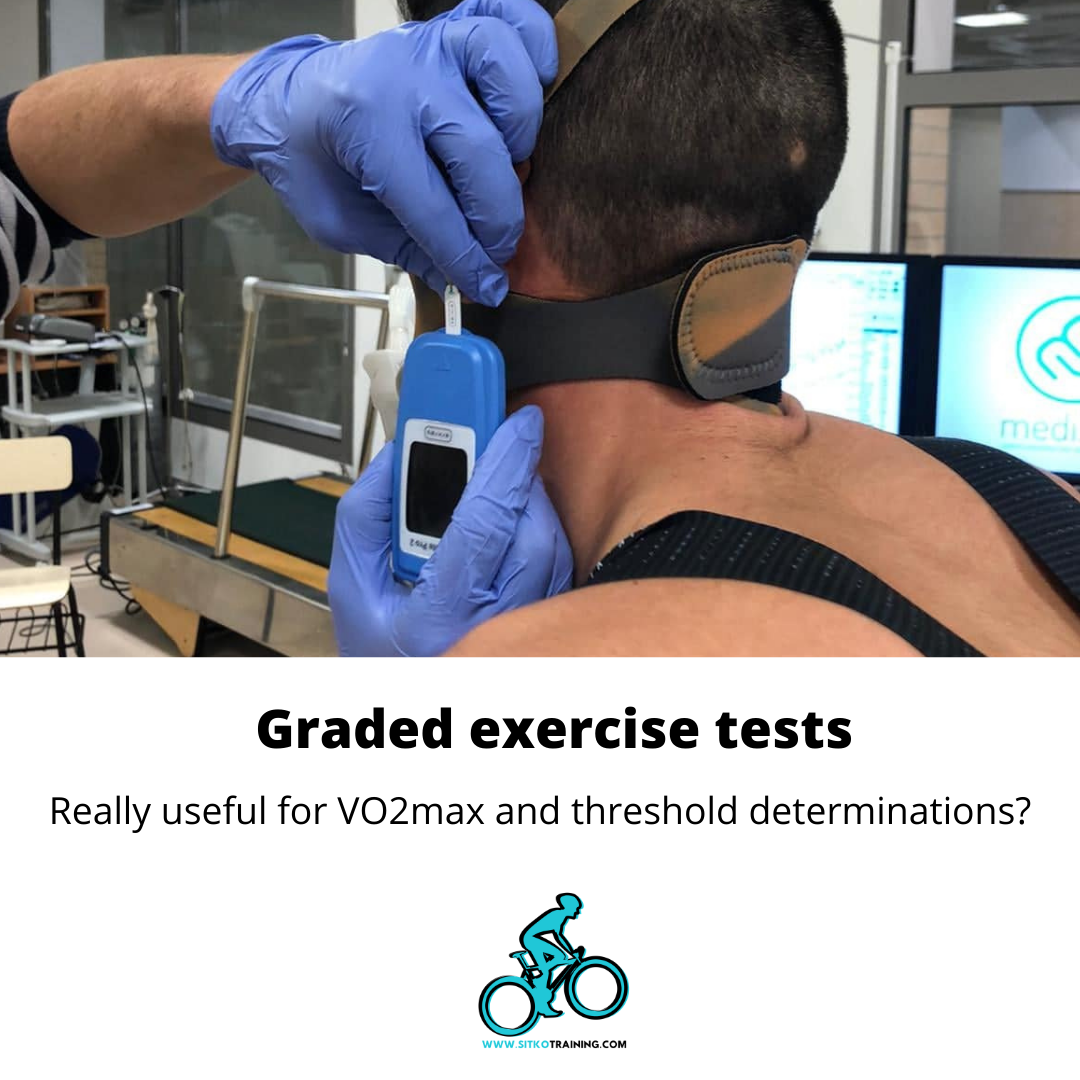 In the scientific and also informative literature there is much talk about the importance of both ventilatory and lactic thresholds as well as the maximum oxygen consumption. Not without some surprise I continue to see how incremental tests continue to be exposed as the method of choice for the determination of these parameters. I say surprise because it seems wrong to assume that something is automatically correct just because it is widely implemented in the practical field. A quick review of the scientific literature written during the last five years highlights the most important setbacks associated with graded exercise testing. This recent evidence highlights the need to discuss whether  the determination of VO2max and thresholds through an incremental test in the laboratory is adequate. The answer is quite simple: if we follow the traditional methods, it is not. I will discuss this question in a little more detail in the following paragraphs:

Question 1: Is the VO2 achieved during an incremental test really maximal?

The classical method of determining VO2max during an incremental test requires the appearance of the so-called “VO2 plateau” at the end of the effort. This concept is based on the assumption that, once a certain intensity is reached, there cannot be a further increase in oxygen consumption. The reality is that the famous VO2 plateau is only displayed in some incremental tests. For all other cases, the so-called secondary criteria (fixed lactacidemia, perception of effort, theoretical maximum heart rate, RER, etc.) are used to decide when to end the assessment and to choose the highest VO2 value reached during the test. What limitations does this methodology have?

First, it has been shown that different VO2max values ​​can be obtained depending on the incremental protocol chosen (Jamnick et al., 2018). On the other hand, various authors have shown that decreasing or even self-regulated protocols produce VO2max values that are ​​higher than those obtained in an incremental test (Beltrami et al., 2012; Beltz et al., 2016). To alleviate these limitations, some authors have suggested performing a supramaximal verification interval after a short rest period at the end of the incremental test (Poole & Jones, 2017). As expected, on many occasions the VO2max achieved in the incremental test is lower than that obtained in the verification interval. The underestimation of VO2max obtained in various incremental protocols can vary between 1 and 5 ml / kg / min, an unacceptable error if we want to work with some rigor (Jamnick et al., 2018). Current evidence suggests that incremental tests of longer stage and total durations result in even greater underestimations of VO2max.

Last but not least, the use of the aforementioned secondary criteria to terminate an incremental test can result in an underestimation of true VO2max of up to 30% (Poole et al., 2008; Midgley et al., 2009; Poole & Jones, 2017). As if this was not enough, the use of secondary criteria may lead to the rejection of tests in which the subject has reached the real VO2max. Taking into account all the above, we can clearly answer the question posed at the beginning of this section: in the vast majority of incremental protocols applied in laboratories, the VO2 peak reached will not be the athlete’s VO2max. Does this mean that most of the tests performed in physiology laboratories are inaccurate? We will discuss this at the end of the article.

Question 2: Can thresholds be determined from an incremental test?

The attempt to determine thresholds from the data of an incremental test fails directly at the foundations of the methodology: the attempt to determine a metabolic state associated with exercise at constant intensity through a variable intensity test is, at least, contradictory in nature. During an incremental test, none of the physiological parameters reach a stable state due to the constant changes in metabolic demands. This results in a VO2 value that does not reflect the true metabolic needs associated with a given power. As a consequence, any power imposed during constant intensity exercise will reflect a higher VO2 than that measured at the same power in a ramp protocol. What happens as a result? An overestimation of the power output for a given metabolic state (Keir et al., 2018; Caen et al., 2020; Iannetta et al., 2019).

This error can be observed in quite a few rather amusing studies, in which a steady state parameter (say RCP, VT2, LT2 or MLSS) is determined and then the authors verify, with surprise, that the time to exhaustion at the intensity of that “steady state” is 20 minutes. Of course, if we overestimate the power associated with that metabolic state by 15 or 20 watts, we are expecting to observe times to exhaustion that characterize threshold intensities during supra-treshold power outputs. Logically, this comparison has no sense and the results will be ilogical. Once we know that the thresholds detected during an incremental test are skewed in most cases, what can we do?

First, increasing the length of the test and the stages can limit the dissociation between the ramp VO2  and the constant intensity VO2 (Iannetta et al., 2019). This type of longer protocol is more interesting for the determination of lactic rather than ventilatory landmarks: as we have said previously, prolonging the duration of the ramp will result in an even greater underestimation of VO2max. Thus, we are at a crossroad: if we want to make less mistakes with the thresholds, we will have to deal with an erroneous VO2max assessment. The solution is neither obvious nor simple. Some authors have proposed protocols that, in theory, could allow a posterior adjustment of the dissociation. The problem is that these adjustments increase the time in the laboratory: a long interval at low intensity is required to determine the MRT (Mean Response Time) and to carry out the subsequent adjustment, which will only be valid for moderate and low intensities (Caen et al., 2020). For higher intensities, a new adjustment must be made taking into account the slow component of VO2 (Iannetta et al., 2019).

The reality of these strategies is that they require a much longer stay in the laboratory (because of the extra interval added at the beginning of the test and the highly smoothed ramp protocols), an issue that, as we will see at the end of the article, is very problematic for the people who are in charge of the lab. Regarding the question at the top of this section and contrary to what happened with VO2max, which is usually underestimated, during a ramp protocol overestimation of the power associated with the different thresholds is extremely common. This has totally disastrous consequences for training: the erroneous  threshold determination  completely conditions the intensities at which the athlete ends up working and, accordingly, impacts his training load.

Question 3: What problems does this cause in practical terms?

The problem caused by all the above is simple: what we should do in an ideal situation is difficult to implement in the context of day-to-day laboratory tests. In physiology laboratories, scientists do not work poorly in a conscious way, they only adapt to what the client asks for. I have been the first to adapt to the temporal and economic possibilities of the athletes that come to my lab. We live in a world where we all want everything nice, good and cheap. It is very common for an athlete to go to the laboratory and try to obtain his ventilatory and lactic curve together with his VO2max after one hour of testing. Most athletes can and want to assume the economic and temporary cost of an incremental test, but can’t or wouldn’t pay for a stay in the laboratory that involves the correct procedures for the determination of VO2max and the ventilatory and lactic landmarks. The athlete commonly asks for a complete check-up that is also cheap and fast. Those in charge of the laboratories should be honest in these cases and tell the reality: the procedures for the correct determination of VO2max, ventilatory and lactic landmarks are different and difficult to combine in a single incremental test. If we still have to measure all these parameters in a single analysis, we must inform the athletes of the limitations and that, in the best of cases, we are going to obtain a mere approximation to the real values. Incremental tests, at least as we know them today, are not a suitable method for determining the athlete’s VO2max and thresholds. If, despite being aware of this, we decide to proceed with this type of test, at least we should always use the same protocol with the same athlete, so that the error obtained in the various data collections is as homogeneous as possible.

Professor, Faculty of Sports Sciences of the University of Zaragoza, Master in high performance by the French Olympic Committee, Graduated in Sports Sciences, National Cycling, Triathlon and Athletics Coach and official trainer of the American College of Sports Medicine.